How to Identify Skewed Data Pt. 1

Any papers or news releases you come across will have information they are and are not telling you. This does not mean the paper or article has bad information, but it does mean identifying what they are not telling you is often just as important as what they are telling you. Here we detail a few tips we have come across when looking at data which can be applicable to investors and researchers alike! Featuring: Capacity Retention, C-Rate, Full Cell Energy Density

1.) Capacity Retention Values There is no industry standard way to report this. If a paper indicates 80% capacity retention at 1000 cycles– it sounds pretty good. However, what they may not tell you is where 100% capacity value is calculated. It may be 2, 5, 10, or more cycles in, in which case they could be hiding huge first cycle losses. If we had a 50% first cycle loss and that 50% was calculated to be 100% capacity, that 80% capacity retention at 100 cycles doesn't seem as great. 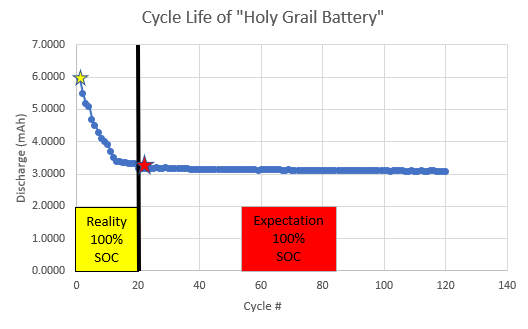 2.) C-Rates High c-rates are important for many battery applications, but what many sources wont tell you is how it is actually calculated. C-rates can be skewed to make them look better than they are in a few ways. First, they can calculate 1C to be at whatever capacity they want. Just like for capacity retention, they may calculate 5, 10, 20 cycles in after battery capacity has stabilized. Second, It also could be an average of many cells or maybe just one cell. All these factors will effect the reliability of that measurement. Third, If clarifications are not given into what kind of current are the electrodes actually seeing, you should be skeptical of the result. Areal current density can be a better measurement to look at this as it cannot be skewed by capacity. Why does this all matter? The analogy we like to use here is imagine the stadium used for the Superbowl. Now imagine everyone trying to get into the stadium and we had a steady flow of people coming in who had 20 hours to get in. There would be minimal lines. Everyone would get to their seat. With 20 hours to leave, everyone else would also have plenty of time to leave. Now imagine the same amount of people trying to get in in 1 hour. It would be chaos. There would be huge lines. Some of the furthest seats from the entrance may not even be reached and there would be some people who didn’t make it in in the first place. This would be the same once the event is over. Not everyone would get out on time. This is the same in a battery. Using an extremely low c-rate will artificially raise your efficiency which makes a cell that really isn’t very useful for most applications. C-rates cannot be trusted unless they tell you how its calculated.
3.) Full Cell Energy Densities We will say it here: Without an itemized list of components, full cell energy densities should not be trusted. There are many questions that should be asked, but probably wont be answered such as: Are the pouch and tab materials included in the calculation? Are any components left out? Is this a calculated or measured value? Does the calculated value use materials that actually exist? These values can also be artificially skewed in so many ways by doing things like cutting weight on every possible component or just leaving certain elements out of the calculation all together. You are no longer comparing how well a cell actually works. Instead, look for the specific energy of electrodes and how well they actually work. Comparing electrodes is much easier and more accurate than full cells. Not that full cell energy densities are not sometimes important. But if you are going to compare one cell to another, be sure you have all the facts.